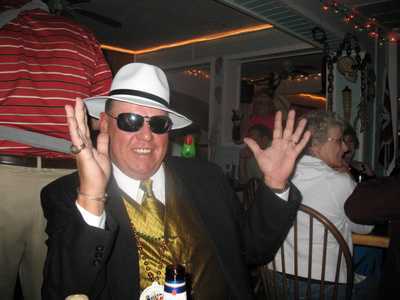 yobillybob's real name is Bill B. Bill is 70 years old, is located in Florida / USA and has been a SingSnap member since January 17, 2009. He has a total of 220 public recordings that have been viewed 5,752 times and 324 achievement points.

Like all SingSnap members, I love to sing! Beginning at age 4, I'd go to a few of the neighbor's houses, on my way to Christmas Eve mass, and would sing caroles besides their manger displays. This eventually lead to becoming a member of the church choir and school choruses while growing up.

In high school, I formed and became the lead singer of a 5-part acapella group named "Blue Eyed Soul" that sang only Motown songs. In my sophomore year, I had the honor of being chosen as the male soloist in my home state's All City Choir, a 1500 member collection of teenagers from all of Delaware's junior and senior high schools. That performance provided a springboard for me to become a member of the national traveling troupe "Up With People", a memory that I treasure to this day.

After a 4-year tour of duty with the US Navy in Hawaii, and due to a vocal chord injury, I stopped singing publicly until a friend introduced me to karaoke. I still go out to sing karaoke occasionally so I can enjoy the camaraderie of hanging out with my karaoke friends. In 2013, I formed the pop vocal group, The TBD Trio and, during the next three years, we delivered over 350 performances, singing oldies at various social, civic and community venues and on behalf of local fundraisers and charity benefits. In 2015, I was second place finisher in the Bright House Senior Idols competition, put on by the seven-county cable network in this area, that hosted over 3,000 entrants that year. Despite not winning, I met many great people who share my passion for performing, many of whom have become dear friends. Today, I do a one man show, performing under the name BC Music Company simply because I love singing and entertaining.

Like so many of its members, SingSnap has provided an outlet for me to share my voice and songs with friends and acquaintances all over the globe. And, while I haven't posted many songs here, recording on SingSnap provided me with the inspiration I needed to put my personal recordings together in a compilation album that I've titled, "Just Bill". I'm a rock-n-roller at heart, but also enjoy singing some country songs as well. My home recording equipment is not as sophisticated as many of the members here, and my sound system is just too much of a hassle to set up, so the appreciative comments I receive on my recordings are very rewarding.

I've met a lot of great people thru SingSnap and my advice to all is from an old Up With People song - "Keep Young At Heart" - and keep on singing!