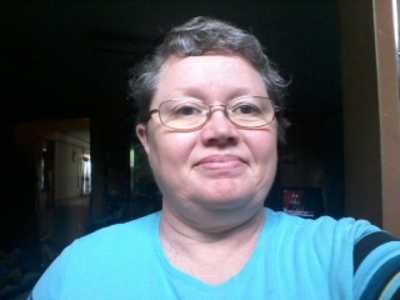 ShortMissouriSongGal is 54 years old, is located in Missouri / USA and has been a SingSnap member since May 2, 2011. She has a total of 100 public recordings that have been viewed 6,647 times and 10 achievement points.

My real name is Jamie
46 years young and disabled since Sept.1996
My 21 year old son James lives with me.He works (1 full time job),and is called as needed when our friends have odd jobs for him.He looks after me and also does things around the house that I'm unable to do.
Since July 2010 I have suffered three strokes.
The third one occured on 9/12/11.I didn't think that I would ever be able to sing again after I had the first two.However there's power in prayer.
Before my strokes I had became disabled in September 1996 due to an on the job accident . I also suffer from Laryngopharyngeal Acid Reflux Disease.It affects my throat,voice box,and larynx. I was diagnosed with the Laryngopaharyngeal in 2003.So at times when I sing I may not sound the best because,of it dealing me a fit.I find that being on SingSnap is really great therapy for me.As I do enjoy singing and listening to others and making new friends. .The strokes have affected my brain.I also have Disarthrea caused from the first stroke. Which my speech migt be clear at times when I speak and other times it might not. Being on singsnap is good therapy for me.I like to make new friends too.It's lonely to me at times since I can't get out and go the way that I used too.I have difficulty walking as a result of the first stroke.
I used to like going to garage sales and flea markets
Going now really tires me and wears me out but,still like to go when I can
Love the following things:
Face book ; pen paling through email
Cooking,collecting & sharing receipes
Singing and writing songs and poems
Like to sing duets that are made for a man & woman only
Duetting on gsopel songs
Singing duets that are for any number of people
Love old country songs,Gospel,Oldies,Bluegrass,Western
If you aren't sure weather I like a style of music just ask.
If you want to know anything else just ask I won't bite.
May God bless you and Thanks for stopping by.