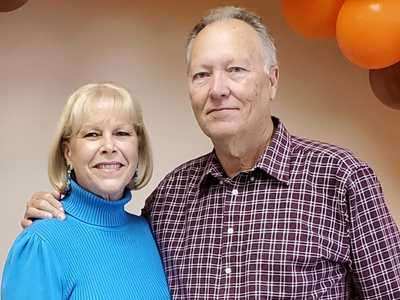 Ron-N-Susan's real name is Ronnie & Susan Kinney. Ronnie & Susan is located in Texas / USA and has been a SingSnap member since March 20, 2009. She has a total of 5,230 public recordings that have been viewed 71,020 times and 379 achievement points.

Hello friends!
Ronnie and I changed our username - me (Susan) username use to be ElvisFan4Ever and Ronnie's (Ron) use to be rwayne....we combined the two accounts into 1.

Ronnie and I met on May 7, 1999 (ironically my parents wedding day back in 1955), I was 41 years young and never been married. I knew I'd found that "once in a life-time love" on our first date, two days after meeting him which was, May 9th. Our courtship was a whirl-wind. Exactly 3 months later on August 7th, Ronnie popped the question in Zale's Jewelry Store, of course I said yes. We were married on April 29, 2000.

We celebrated our 20th anniversary this year during the pandemic by dressing up in costume (the roaring 20's) and had a candlelight dinner. Ronnie also wrote a song and sang it to the tune of "The Legend of Bonnie & Clyde".

Love stories are beautiful and I love telling ours.

I love that I am from the great state of Texas, born and raised TEXAN

Most of you that know me know that I am CRAZY about Elvis!!

My very first "1st Place Banner Trophy" & it is with great pride that it was achieved in one of the most fabulous contests (my opinion) on SingSnap ~ "J&D's Country Girls @ Heart 41st Edition" !!!
Thanks Denise & Johnny!!
Sorry... had to delete the banner, it no longer fits the format for SS