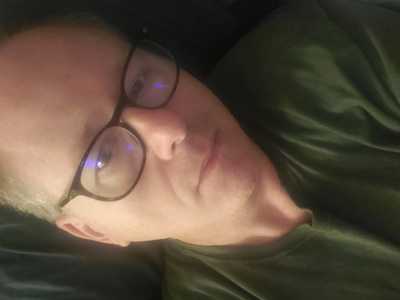 Mr_Ada's real name is Chris Sparks. Chris is located in Arizona / USA and has been a SingSnap member since July 19, 2007. He has a total of 157 public recordings that have been viewed 3,726 times and 339 achievement points.

For inquiring minds, LOL, I am called a countertenor or male soprano. Both terms work for me. I have had some training and was classified by a vocal coach (Professional German tenor) as a natural countertenor (or one could say a natural alto/mezzo soprano). I use techniques which focus on my using my Head voice for singing and not falsetto.

I have seen a lot of folks use the F' (falsetto) word and for me it doesn't occur until I get really high in the soprano range. At that point I am not sure! LOL I think of the Bee Gees when they sing the high notes in the song Tragedy.

Well I have an interesting story... Back in 12th grade (1978) I tried out for a musical as I was fascinated by the performing arts. When it came time for auditions I refused to even sing happy birthday. I just wanted a non-solo part. The director at the time convinced me to go for that audition but only in private. Which I did and he told me that I should have sung as it would have easily landed me a role in the musical. I still was nervous singing around people but I did join the choir in high school and got my first baroque experience singing Handel's messiah in the choir. I was placed in the tenor section as that is where I felt comfortable singing.

I went on to college the next year and joined the college choir. Still thinking I was a tenor. When I was in the choir the director placed the tenors in the middle with sopranos and altos to the left and right and the basses in the back. I found that I could imitate any of the groups from Bass Low C (which I cannot do any more) to Soprano A or High C (can't remember how high they sang back then). It used to bug my instructor that he would hear the wrong voice coming from the wrong section. Yes that was me!

I was with a man back then who berated me for singing high. I used to sing note for note with Donna Summer and Barbra Streisand back then if that gives you a clue as to what I could do. He used to tell me to stop singing like a girl. Also I used to get phone calls and would be called the woman of the house. Stereotypes are brutal.

So for 25 years I stopped singing publicly. I used to sing in my car every now and then where I thought no one could hear me! Wouldn't have thought to sing in front of people. Especially solo. The only solo I sang was back in 12th grade at our choir concert. Singing Edelweiss.

So back in 2007, when Pavarotti died I had a vision while at work. He came to me and said why wasn't I singing. Given the kind of work I do that vision came at a inopportune moment. So I looked into singing again. Joined Esnips (not a member any more) and then SingSnap. I thought I was a tenor so I tried to sing tenor arias and found that I am not really a tenor. So someone mentioned to me to listen to a fellow on You Tube who sang as high as a girl! Of course I was fascinated and it was Phillipe Jaroussky. He was singing in that voice, the voice that got me so much grief as a younger man. I decided to explore other countertenors and have convinced myself that this is what I was. I have only heard 1 professional countertenor and yet it still was foreign to me because it wasn't me. I have listened to many male sopranos and there is where I am at. That feels natural to me, that is who I am.

So singing low for me now is a tad painful after some singing. I don't like to sing in my lower register as it wears my voice out. At my local karaoke bar I sing in a lower tone because most here are oblivious to my voice type. Singing very low causes me vocal strain so I avoid as much "bass" as possible. That is another story.

Me singing Crazy by Patsy Cline (Showing no falsetto)

Link to Wikipedia on Falsetto:

"The falsetto voice—with its characteristic breathy, flute-like sound relatively free of OVERTONES—is more limited than its modal counterpart in both dynamic variation and tone quality. The term falsetto is most often used in the context of singing to refer to a type of vocal phonation that enables the singer to sing notes beyond the vocal range of the normal or modal voice."