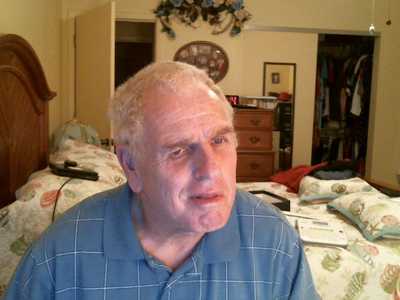 Homesteader's real name is Randy Parsons. Randy is 69 years old, is located in Florida / USA and has been a SingSnap member since June 20, 2011. He has a total of 21 public recordings that have been viewed 4,408 times and 210 achievement points.

Hi everybody sing snap is one fantastic site with great members. My name is Randy Parsons and my wife is Jamie my son is Jon and daughter kelley. Four grandchildrem . Tyler, Dylan, Jacob and Jayden. I dated Jamie 4 years of high school and we have been married 45 years now.I was diagnosed with Parkinson's 13 years ago and retired Sept. 4, 2012. I use to compose songs while traveling between service calls. "Lady You're Something Special In This World" was written for my wife. She has had 16 surgeries and a host of other medical problems but she keeps on going no matter what is thrown her way. I wrote the song about 26 years ago and surprised her with it. Here's how.
I worked at a high school which has a performing arts building that seats 1000. I was able to get use of the performing arts. WE set it up to surprise her on a Sunday afternoon. I told my wife that I had a golf tournament that day and would be gone all day. About a week before the big event I told my wife to remind me that I needed to to tell the plant manager at the school that there was a band concert on that Sunday and they needed custodial help to clean up. On the Friday before the event my daughter in law called up my wife and told her there was a band concert at the performing arts Sunday and Tyler the oldest grand child was head drummer and it was his birthday and he would like all the family he could get to come to the concert. We sent out invitations and called friends and relatives and explained to them that they needed to be in and seated by 1:45 because we turned the lights almost all the way so she would not be able to see well as she came into the theater. Tyler led her down the isle and 1/2 way we hit her with a spotlight. Then the two youngest grandkids stepped out and handed her a 1/2 dozen roses each. Then a neice stepped out and gave her a box of tissues and told her Aunt Jamie you're going to need these,
They set her down at the front of the theater and then it went pitch black and you hear my voice say. Jamie I hope you will forgive me for the mystery leading up to today. No it's not your birthday and it's not your anniversary it's just because Just Because We Love You. WE then did a 20 minute montage on the full size movie screen of her life starting as a baby and ending up with the grand children. Playing in the background 1. Lost in the 50's Tonight ( she was born in 1950 ) 2. Lady 3. Brad Paisley " All Because Two People Fell In Love 4. Ending with Jim Croce ' I Have To Say I Love You In A song. At that time we went to total black and you hear my voice Jamie how appropriate the last song because I wrote a song for you some years ago and just had music put to it. I hope it will become our song for all time. WE then played " Lady You're Something Special " When the song ended I came down from stage left and asked her if she was ready for the rest? She asked me what and I told her we we're going up on stage. She said NO I said YES. She asked me why and I told her I was going to sing the song to her. We got her on stage and sang the song we then turned up the lights and we had right at a 100 people in the audience. She had no idea there was that many people there till we turned up the lights and yes she cried the whole time. Got a lot of brownie points with that one.