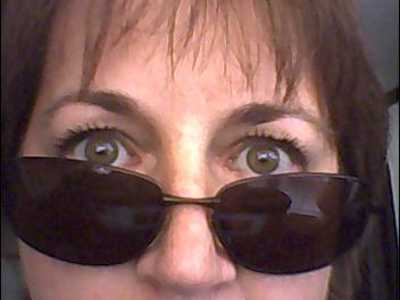 Gloriha's real name is Nancy Jane. Nancy is located in Florida / USA and has been a SingSnap member since December 16, 2007. She has a total of 93 public recordings that have been viewed 3,598 times and 379 achievement points.

A sailor who was habitually drunk, publicly announced to all the men in his division and others at the bar that he was swearing off drinking and that they all should give up this foul habit also. But the others would taunt and tease him to fall off the wagon by buying him whiskey and getting him drunk. So, every morning he would be back at it again, preaching about the sins of alcohol.

One day, his shipmate told him he ought to give up preaching about the evils of the jug, since he always ends up drunk.

With a twinkle in his bloodshot eyes he said, "What, and give up all the free drinks?"

I couldn't decide whether to go to Salt Lake City or Denver for vacation, so I called the airlines to get prices. "Airfare to Denver is $300," said a cheery salesperson.

"And what about Salt Lake City?"

Katie, a RN, was unhappy with her job, so she submitted her resignation. She was sure she'd have no trouble finding a new position, because of the nursing shortage in her area.?

She e-mailed cover letters to dozens of potential employers and attached her resume to each one. Two weeks later, Katie was dismayed and bewildered that she had not received even one request for an interview.?

Finally she received a message from a prospective employer that explained the reason she hadn't heard from anyone else.?

It read: "Your resume was not attached as stated. I do, however, want to thank you for the vegetable lasagna recipe."

A milkman was making his deliveries and found a note attached to a customer’s door saying, "I need 45 gallons of milk."

Perplexed, the milkman knocked on the door and a beautiful, blond answered it. "Is this a mistake?" he asked.

"No," she said, "I was watching a talk show and it said that bathing in milk is good for skin renewal."

"Really?" replied the milkman. "Okay, do you want that pasteurized?"

Two older ladies were sitting on a park bench outside the local town hall where a flower show was in progress. One leaned over and said, "Life is so boring. We never have any fun anymore. For $5.00, I'd take my clothes off right now and streak through that stupid flower show!"

As fast as she could, the first little old lady fumbled her way out of her clothes and completely naked, streaked through the front door of the flower show.

Waiting outside, her friend soon heard a huge commotion inside the hall, followed by loud applause. The naked lady burst out through the door surrounded by a cheering crowd.

"What happened?" asked her waiting friend.

"Why, I won first prize for 'Best Dried Arrangement'."

My wife was focusing on magnets during one of her science lessons in Kindergarten.

One kid thrust up his hand and answered, "You're a Mommy!"

Started to go to gym this morning. Could not find my membership card. A new one costs $10. Coffee and a donut costs $3. HA! Guess who saved $7?

Don't wear headphones while vacuuming. I finished the whole house this morning before realizing the vac wasn't even plugged in.

All the toilets in New York's police stations have been stolen. The police have nothing to go on.

I didn't like my beard at first. Then it grew on me.

This girl said she recognized me from the vegetarian club, but I'd never met herbivore.

Haunted French pancakes give me the crepes.

A house painter wanted to save some money by spending less on paint. So, when he landed a job painting a large church he added paint thinner to his paint to make it go farther. He set up his ladders and scaffolds, climbed to the top of the church steeple, and began painting. He was about half done when a storm suddenly came up. Before he knew it, the scaffold began to sway and shake. Finally, it collapsed, dumping him into the bushes at the base of the church. His was unhurt but his doctored paint ran down the walls of the church, exposing the scam.

Realizing he had pushed his luck too far in trying to cheat while painting a church, he shouted into the storm, "Forgive me! How should I make up for my sins?"

A voice from the clouds proclaimed, "Repaint! Repaint! And thin no more!"

A group of friends from the Cottonwood Church wanted to get together on a regular basis, socialize, and play games. The lady of the house was to prepare the meal. When it came time for Al and Charlene to be the hosts, Charlene wanted to outdo all the others. She decided to have mushroom-smothered steak. But mushrooms are expensive. She then told her husband, "No mushrooms. They cost too much."

He said, "Why don't you go down in the pasture and pick some of those mushrooms? There are plenty in the creek bed."

She said, "No, some wild mushrooms are poison."

He said, "Well, I see varmints eating them and they're OK."

So, Charlene decided to give it a try. She picked a bunch, washed, sliced, and diced them for her smothered steak. Then she went out on the back porch and gave Ol' Blue (the yard dog) a double handful. Ol' Blue ate every bite. All morning long, Charlene watched Ol' Blue and the wild mushrooms didn't seem to affect him, so she decided to use them.

The meal was a great success, and Charlene even hired a helper lady from town to help her serve. After everyone had finished, they relaxed, socialized, and played cards and dominoes. About then, the helper lady came in and whispered in Charlene's ear.

Charlene went into hysterics. After she finally calmed down, she called the doctor and told him what had happened. The doctor said, "That's bad, but I think we can take care of it. I will call for an ambulance and I will be there as quickly as possible. We'll give everyone enemas and we will pump out everyone's stomach. Everything will be fine. Just keep them calm."

Soon they could hear the siren as the ambulance was coming down the road. The EMTs and the doctor had their suitcases, syringes, and a stomach pump. One by one, they took each person into the bathroom, gave them an enema, and pumped out their stomach. The scene was not pretty.

After the last one was finished, the doctor came out and said, "I think everything will be fine now," and he left. They were all looking pretty weak sitting around the living room.

About this time the helper lady came in and whispered to Charlene, "You know, that guy that run over Ol' Blue never even stopped."

... and then the fight started.

A streaker is someone who is unsuited for his work.

Nail on board is not good as screw on bench.

Man who dates dynamite lady gets big bang out of her.

He who seeks revenge should remember to dig two graves.

It is better to be looked over than overlooked.

Never have sex with a stranger unless you are stranger than them.

Abstain from wine, women, and song; but mostly song.

After the funeral, Mrs. Smith was talking with her best friend about the dearly departed. "You know, he never wanted to leave home, wanted to spend all his retirement years right here in town. He just refused to take me to Hawaii or even to take a cruise in the Mediterranean."

A friend asked me the other day why I never got married. I replied "Well, I guess I just never met the right woman. I guess I've been looking for the perfect girl."

"Oh, come on now," said my friend. "Surely you have met at least one girl that you wanted to marry."

"Well, why didn't you marry her?" asked my friend. I shrugged my shoulders and replied, "She was looking for the perfect man."