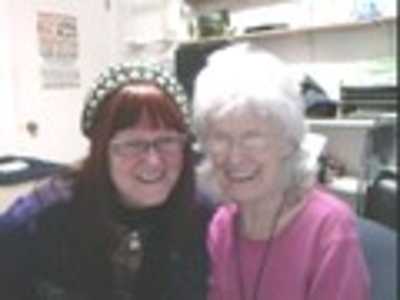 A-Closet-Singer's real name is Marge Litzenberger. Marge is located in British Columbia / Canada and has been a SingSnap member since April 24, 2008. She has a total of 70 public recordings that have been viewed 6,811 times and 157 achievement points.

Hi all my Singsnapper Friends,

Update - July 18, 2015. Sorry I’ve been away from SS for such a long time.
I have been declared legally blind. My vision has deteriorated to the point I can no longer see to read or leave comments other than one or two words.
The scrolling lyrics on songs are impossible for me to read therefore I can only sing songs that I remember.
Otherwise I am fine and still hosting 2 countries jams each week in our living room.
Thanks to all who have been concerned and asking about me.
Hugs Marge

UPDATE JUNE 2014.- My Daughter Linda McRae's New CD '50 SHAES OF RED' is being released by BOREALIS RECORDING COMPANY on June 15th.
You can read more about it on her website lindamcrae.com
I have already heard it and it is PHENOMENAL ~ I hope everyone who buys it will love it as much as I do.

I'm a Stay at Home Retired Lady who no longer drives because of Macular Degeneration.

Don't feel sorry for me though, I LOVE being at home with our two little dogs Maxx and Sam. They are very spoiled and have my hubby Ray & I wrapped around their little paws.
(Update.. our poor little Sam went to doggie heaven Feb 22, 2012. We miss him terribly).

My hubby bought me a guitar for Xmas 2010.
I immediately started trying to learn to play by ear as I can't see well enough to take lessons.

2 weeks later in January 2010, I was coming along quite nicely and was learning quite a few chords when I fell and broke my left wrist quite badly. It was over 6 months before I could even attempt to put my wrist around the neck.

I had forgotten all I had learned and so back to learning all over again with sore almost bleeding fingers at times.
I'm slowly learning lots of the chords again but still find my wrist gets pretty sore at times.

Please excuse all the typo's when I comment on your songs... my limited vision makes it difficult to catch errors and my typing has never been good..(smile) and so far I refuse to cut and paste. I hope you will understand that members who have pages that are glittered up, even though I may listen to your recordings, I won't be able to read the comments others leave for you, however I will leave a comment for you after I listen. All the glitter takes TOO long & almost impossible to read the comments because of my AMD.

I love music, particularly the old classic country and the big band stuff.
***
Thanks ... Happy Singing~

I was getting bored playing and practising my guitar alone ~ so I put out the word that I wanted people to come to my house to jam with me.

The result was that I am holding 2 JAMS each week now which is a lot of fun but it has cut back the amount of time I have to spend on Singsnap.

Thanks to all who drop by my studio. I promise to return the favor and visit you very soon... Hugs..Marge

i am very excited, my daughter Linda McRae has just released her new CD. It is called "ROUGH EDGES AND RAGGED HEARTS'
When you have a few minutes, please drop by her website by visiting her website which is lindamcrae dot com

October, 2012.
News about my daughter Linda McRae's CD.Rough Edges & Ragged Hearts has just been nominated for Contemporary Album of the Year Award for the 2012 Canadian Folk Music Awards!
Congratulations Linda!

UPDATE: Nov 18, 2012.
Unfortunaley Linda did not win the CFMA Award however just being nominated is a huge honor. She was interviewed by Paul Mills one of the CFMA Directors.
YOu can listen to her interview on you tube by typing in her name lindamcrae CFMA